Five years later, Albanian football writer Ermal Kuka looks back on the drone incident in Belgrade and what’s happened ever since 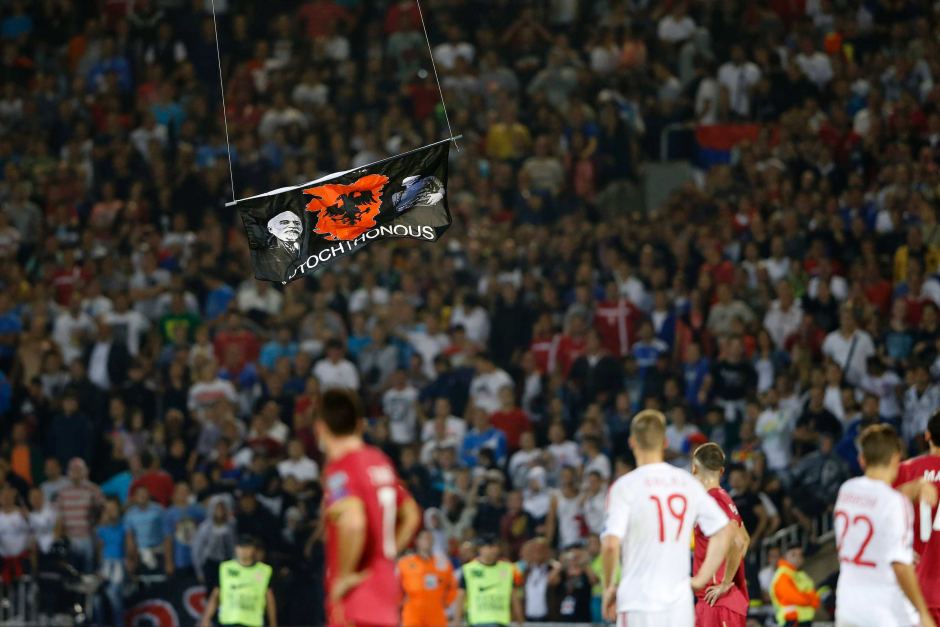 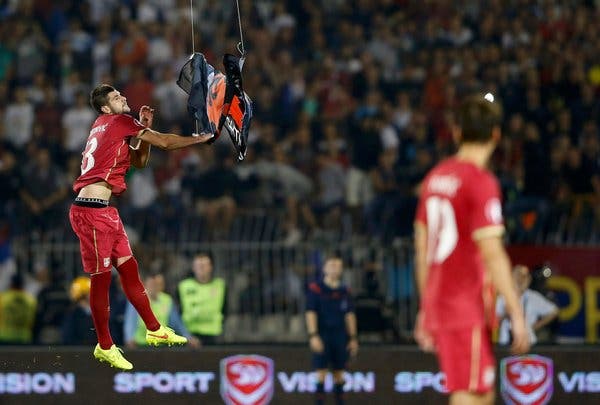 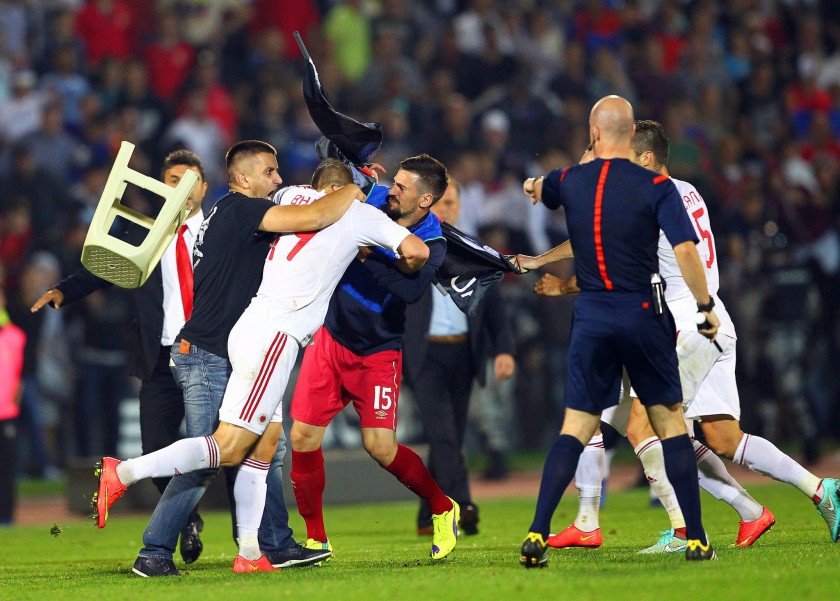 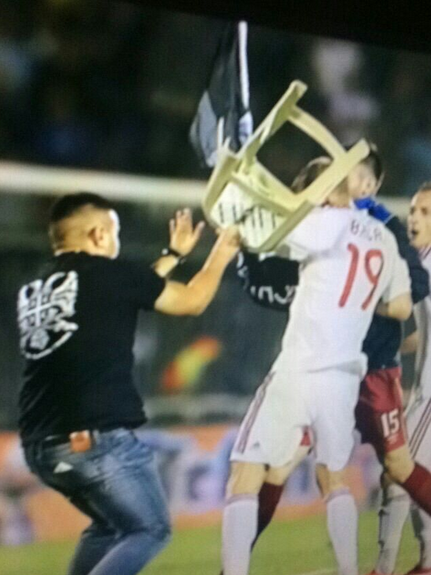 Ermal, on the eve of that infamous Euro qualifier between Serbia and Albania in Belgrade, were there any omens that something bad was about to happen in the Serbian capital? How palpable was the tension surrounding the game?

That one was a heavily politicised match and it is fair to say that we did not expect a friendly attitude inside the stadium towards our team. Having said that, nobody expected the fans and stewards to hit them, but you could really sense that something was not right even the day before when we saw that both the army and the police forces were on the streets of Belgrade. They closed down the city for our team’s bus to move from the airport to the hotel and that is not how you prepare for a game in normal conditions. They were raising up the tension artificially, even with useless things like not allowing the delegation of journalists, sponsors and VIPs - the only ones allowed to attend the match from the Albanian side - to wear scarves with the Albanian flags, Albania NT shirts etc.

What are your personal memories of the drone incident?

I was following the game on TV, everything seemed normal, we were playing well. And then, all of a sudden, the game stopped, we thought it was about the chants but then we saw the drone and the flag. At first, I thought it was a Serbian stunt, then I saw the whole flag and the reaction of the Albanian players and realised those were our symbols. I did not expect the situation to escalate to that level, though. I was stunned for a couple of minutes, trying to figure things out, as most people were when the fans were allowed to enter the field and assault our players and the security guys joined in too. Then the reporter instinct kicked in and it all turned out into a hectic work evening as you must imagine, with a lot of newspaper pages waiting to be filled.

What was the immediate reaction – on air and in the streets of Tirana – to everything that happened in Belgrade that night?

You could hear the city buzzing, all bars and pubs were full. And all you could hear in the streets of Tirana was the noise of the TV sets reporting live. Everyone wanted to know what was going on and how the situation was unfolding. Basically, everybody was sitting in front of the TV until there was the official confirmation that the team was returning home safely.

How shocking was the news that Olsi Rama, brother of the Albanian prime minister Edi, who was at the game, got arrested and accused of having controlled the drone from the VIP section [he was soon released without any charges]?

I was at the office, writing about that night’s events when this came up in the Serbian media. And I thought it was really stupid and a way to divert the attention away from the lack of security at that match. It was comical to even think that the brother of the prime minister would go and do such thing from the VIP box, sitting next to a person like Igli Tare and having your name on a really short list of Albanian people attending the match. Sincerely, it was one of the stupidest things I remember about that day, I did not believe it from the second I heard it.

Back in Tirana the Albania players were welcomed by thousands of supporters who greeted them as if they were returning war heroes. Were you surprised by that kind of reception?

There was a proper race to the airport, people wanted to greet the players arriving home safely. There were lines of cars (6-7 kilometers long!) on each way leading to the airport, at 3 am in the morning! It took the police 3 hours to deal with the traffic jam and make way for the team. People wanted to greet them for standing up to the symbols of our country, the two people pictured on the drone flag are Albanian patriots that fought for our independence, not everything was about the Great Albania map, even though all that people remember is that map. Everybody wanted to see them return safe and hear stories first-hand about one of the strangest nights in European football history.

Later Ismail Morina, an Albanian citizen who lived in Italy, claimed responsibility for the drone incident. Morina then explained he stared planning the drone attack after watching Serbian ultra Ivan Bogdanov burning an Albanian flag during another notorious game – the one between Italy and Serbia in Genoa in October 2010. Do you believe Morina’s version?

I do believe Morina’s story. Just google ‘Albania fan Slovenia’ and one of the first pictures coming up is him standing on the net of the stadium, he was a passionate supporter of the Albanian NT for many years and he did some strange things like that. Then I met him personally at the stadium, during a friendly match we won against France. You might not believe it but he was crying out of joy after Kace scored the goal that ultimately won us the match. It was weeks before he went on TV to tell his story, but everybody greeted him inside the stadium and was taking pictures with him. Most of the fans were already aware of what had happened in Belgrade. Basically, two of the biggest fan groups of the NT knew right from the start the identity of the man who did it. I also had it confirmed myself by some members who had been in contact with him the whole way.

After the events in Belgrade Morina was widely considered a national hero in Albania and Kosovo. What’s the public opinion on him now, 5 years later?

They still consider him a sort of national hero because of what he did. You have to admit that his trolling idea was unique even though it ended up provoking a mass brawl and a diplomatic incident. He keeps to himself now, after what happened to him in Croatia and with nearly a death penalty over his head… But people here respect him a lot.

Do you think it was UEFA’s fault in the first place to have allowed Serbia and Albania to be paired in the same qualifying group?

I guess it should have been avoided, because the independence of Kosovo was still fresh and the political situation was tense. Some sort of trouble was expected, one way or another. Even without the drone, had Albania scored first, there would have been trouble inside the stadium. And in these first 40 minutes we were playing better than the home team. UEFA should have thought things better, even when they tried to resume the match in such a dangerous environment ‘for the good of the game’.

Just recently eight Czech fans were arrested over plans to fly a drone carrying a banner that read ‘Kosovo is Serbia’ during the Euro qualifier against Kosovo in Pristina. Do you think the Morina story could serve as a dangerous motivational tool anybody can draw inspiration from?

It was an act of footballing trolling, first and foremost, and his purpose was not to hurt anyone. It’s on each person’s mind, however, to use one thing for good or bad. You might not be aware of that fact, but weeks before that Belgrade night images captured from a drone flying over Anfield Road during the UEFA Champions League match between Liverpool and Ludogorets were on YouTube and had hundreds of thousands of views. Nobody was terrified back then, nobody said anything, while weeks later they called flying a drone a terrorist act. I personally see what Morina and the Czechs did as a trolling attempt, backed by a nationalism feeling. The rest depends on how distorted one’s mind is. Distorted minds took something harmless as Microsoft Flight Simulator and used it for the biggest terrorist attack in history. So it really depends on everyone’s perspective. Morina was not the first to fly a drone over a football stadium, even though he is depicted as such.

CSKA 1948 vs CSKA-Sofia: The Battle of the Reds

Nine Bulgarian league titles in a row: the champions from the Crazy Forest